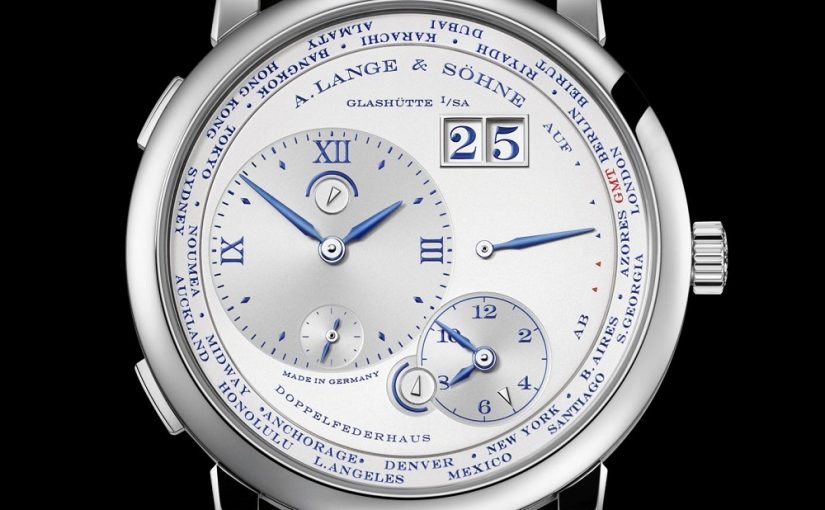 A. Lange & Söhne Replica has just launched the fifth “Lange 1” 25th Anniversary Edition, the Lange 1 time zone ’25th anniversary’ dual time zone replica watch, which still uses the unique silver blue color of the series. Due to the dual time zone function, the dial layout is much more complicated than the conventional version.

The platinum case is 41.9mm in diameter and 10.9mm in thickness. A. Lange & Söhne Replica Watch is the largest one in the Lange 1 family, and its ear lines are still simple and neat.

The layout of the silver dial is very complicated. Two dials, large and small, represent two time zones respectively. Each dial has an independent day and night display – the 9 o’clock main dial is a Roman numeral time scale, integrating a small second dial.

The second time zone dial at 5 o’clock is Arabic numeral time scale, and there is a white triangle pointer at 5 o’clock, pointing to 24 city scales representing different time zones in the outermost circle. You can quickly change the time zone of the small dial through the button on the side of the case, which is a very considerate design of A. Lange & Söhne Replica Watches.

In addition, the dial 1 point is the iconic double digital calendar window, and the 3 point is the power storage pointer, which is a very practical function for the manual movement.

A. Lange & Söhne Replica Watches With blue alligator strap, the official price is $145, limited to 25 pieces.